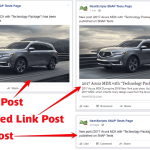 UPDATE (Jan 20, 2017). Version 3.7.11 has been released to WordPress.org plugin repository. it has all code from this beta along with some fixes. Please update your plugin.
————-
New beta version is available for download. Two most popular networks Facebook and LinkedIn just got a completely new configuration interfaces.

You can get beta version from here: SNAP for WordPress Version 3.7.10.Beta (No longer available)
Just upload it to your plugins directory replacing current files or delete your current SNAP version install it from WP Admin. (That will not delete or anyhow affect your currently configured networks and settings).
Since it’s a beta version, please make a backup before upgrading and please report any issues right away.

END_OF_DOCUMENT_TOKEN_TO_BE_REPLACED

SNAP for WordPress Version 3.3.6 has been released. This version adds support for the API 2.0 from Facebook.

Facebook silently changed it’s policy regarding app permissions that available without review and approval. It means that if your app existed before April 30th 2014 plugin will use the same API 1.0 that worked fine for the last 4 years. If your app created on or after April 30th 2014 it will only be compatible with Facebook API 2.0 that requires a complicated review/approval process.

Please see the whole history of the issue here: www.nextscripts.com/known-issues/facebook-issues/

END_OF_DOCUMENT_TOKEN_TO_BE_REPLACED 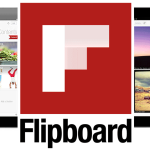 SNAP for WordPress Version 3.3.0 has been released. This version adds support for Flipboard Magazines (Pro Only) and a lot of improvements.

One important improvement is rewritten Facebook API access.
When we started this project as “Facebook-Twitter-Google+ Autoposter” we took official Facebook PHP API library and used it. Two years and 21 networks after that we actually asked a question why exactly we are still using those 47kbs of code. We can do much better then that. We have enough knowledge and experience to use Facebook API directly, without some “middle man”. As a result we got much faster and more reliable Facebook autoposter engine.

Another important change is disabling Auto-Reposter if WP Cron service is not correctly configured. This should save a lot of frustration and prevent many issues.

SNAP for WordPress Version 3.1.2 has been released. This version fixes several bugs.

* [Critical] Bug Fix – [ERROR] (#100) actions should be a JSON-encoded dictionary with ‘name’ and ‘link’ keys
* Improvement/Bug Fix – Plugin will import all comments from Facebook posts, not just the first 100.
* Bug Fix – Plugin were re-posting the same “Sticky” post in some configurations. 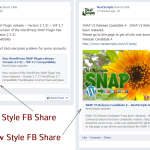 Facebook recently has made a change to shared link thumbnail image size. The whole layout of the share has been changed as well. The big image is now located under the text, not in the left column. 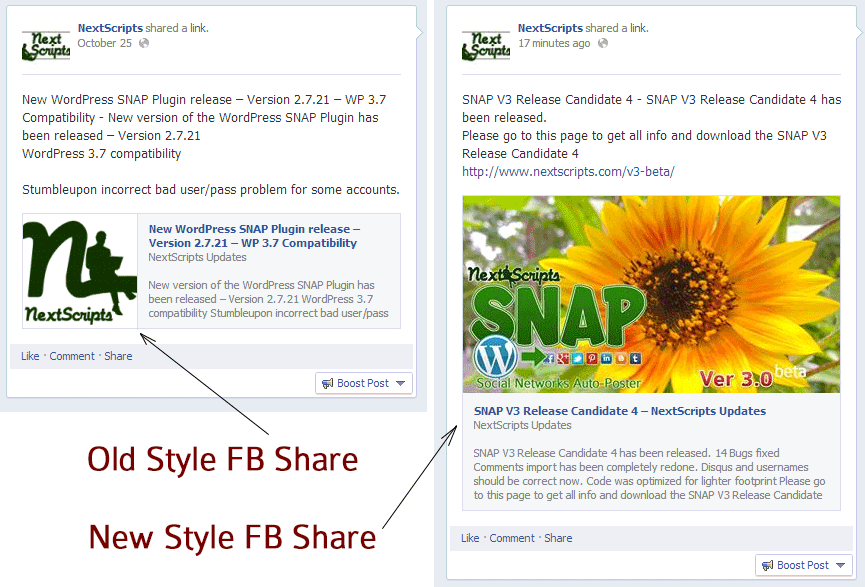 While this new layout yet to be transitioned to the regular API shares, there is a way to make this happen right now. Version 3 has an option to let Facebook decide the share info by itself using your OG tags and other info.

If you check this option and your image is up to the specifications Facebook will make your share presented in the new layout. The recommended og:image size for this feature is 1200x627px, minimum is 560x292px.

Update: Version 3.0 has been released.
Update 2 (January 2014): New layout is available to all types of Facebook shares including API shares.

– link MUST be shared, not attached.
– page must have og: meta tags.
– og:image meta tag must be set and contain the correct image URL.
– size of the image listed in og:image meta tag should be minimum is 560x292px, recommended 1200x627px. 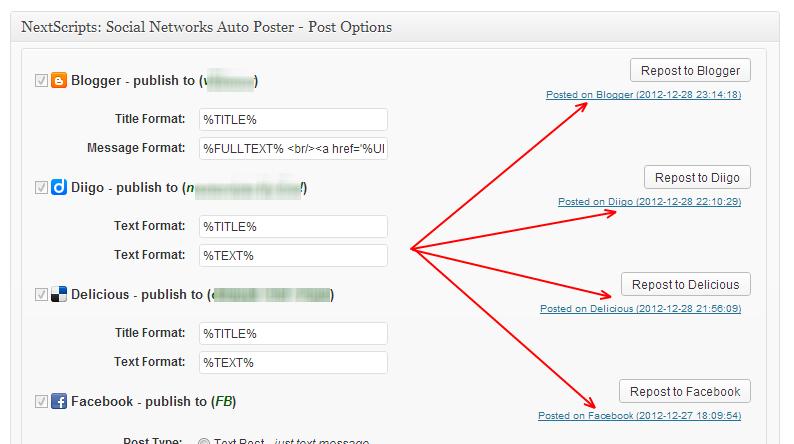 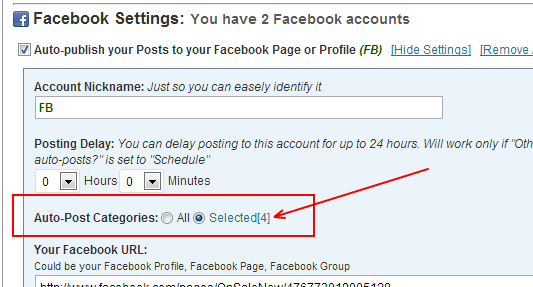 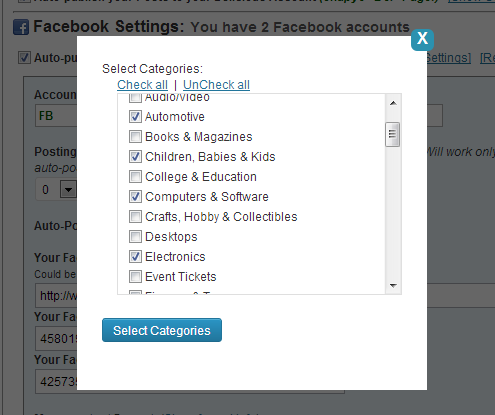 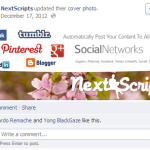 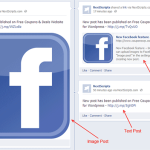 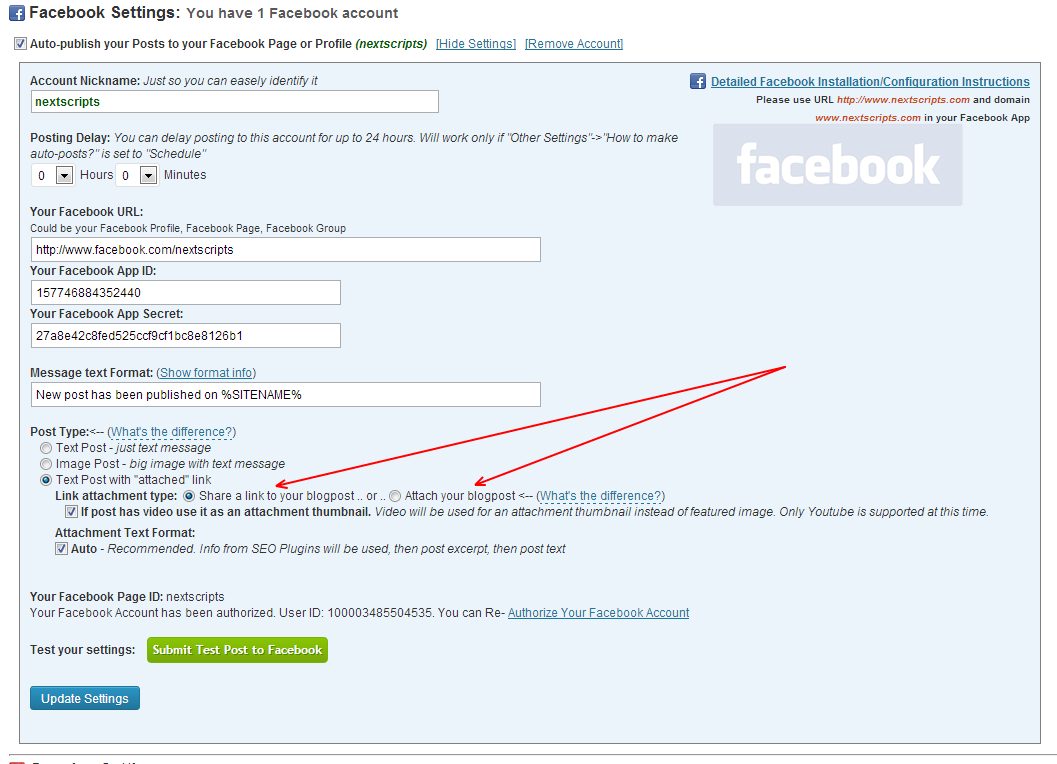 New version has some bug fixes as well as support for video attachment to Facebook posts.