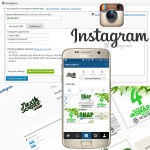 3 years ago we wrote an article explaining why Instagram was not supported. Instagram was accepting images only from the phones and other mobile devices and there was no way to post there from the website or API. Since then we were considering creating our own API for Instagram. Well, today we are announcing it.

NextScripts API for Instagram will be available for all active API subscribers* Friday March 5, 2016 as part of the Universal API.

More info as well as demo is here: SNAP: Autoposting to Instagram